The North Andaman region is easy to reach by from major destinations in Thailand including Bangkok, Phuket, and Ranong. At the northernmost tip of the North Andaman is Ranong province, which has its own airport and well-serviced bus station. The Southernmost gateway is the popular tourist destination of Phuket, complete with international airport and bus station. A bit further away, the eastern gateway of Surathani has an airport and train station that links to Bangkok.

Common starting points for a journey in this area are the towns of Kuraburi, Kampuan, and Kapoe, all of which are situated on the area’s main road, Highway No. 4.

Some communities offer a transfer service, while others may advise you to make your way direct to the village. Please contact your tour operator or village coordinator directly for more travel details which will depend on your mode of transport and previous destination.

Getting here by Bus

Arriving in the North Andaman area by bus is an affordable and convenient way to travel.

Make sure to inform the bus driver of your destination, and he should indicate when you need to get off. Buses coming from the south usually stop in the town of Takua Pa, which is 45 minutes from Kuraburi.

Common arrival and departure points include:

Visitors coming from Bangkok typically take a night bus to either Kuraburi or Ranong. Buses depart from Bangkok’s Southern Bus Terminal (sai tai mai in Thai). Please note that several companies operate these buses, and the company which you buy your ticket from will depend on your departure time. The journey to Ranong Bus Terminal takes eight hours, while Kuraburi is reached in about 10 hours.

Plan to leave for the terminal before 16.30, as the traffic usually gets much worse after this time. If you are traveling during Thai public holidays, it is advised that you arrive at the bus terminal as early as possible.

From Bangkok to Ranong

Buses depart daily from Bangkok’s Southern Bus Terminal (sai tai mai in Thai) between 17:00 and 21:00. There are different classes of bus available, ranging from second class to VIP, which has more space. A ticket costs from around 600 Baht or higher, depending on the class.

Make sure the bus travels down the Andaman coast through Kuraburi. Make sure the destination is Kuraburi (NOT Krabi). Once on the bus, inform the driver or the conductor that you want to get off at Kuraburi. In the event that a direct bus to Kuraburi is not available, you can take a bus to Ranong, and then take another bus down to Kuraburi.

From within Southern Thailand

From Surathani, buses leave for Takua Pa hourly between 9:00 and 16:00. The trip is about three hours long. You will then need to catch a bus north from Takua Pa.

From Khao Lak, take a local bus (two-three hours, 100 Baht) from one of the bus stops. Look for the Phuket-Chumpon or the Phuket-Bangkok bus that runs through Kuraburi. Alternatively, make your way to Takua Pa, and board a bus to Kuraburi, Ranong, Chumphon, or Bangkok. 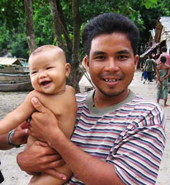