Stories and Articles about NATR and the Tsunami.

Jamie M. Johnston, June 2006
Jamie explains how he and and wife searched Thailand far and wide for a true community-based tourism experience, only to meet certain disappointment at almost every turn. They finally found the peace and unspoiled beauty they were looking for at Golden Buddha Beach. This led them to NATR, where they planted stakes for the next six months as volunteers.

Erik Rogers, March 2006
Erik learned of NATR the same way as many of our early volunteers—through Crooked Trails, a U.S.-based non-profit that leads community-based tours throughout the world. Here Erik reports for the Crooked Trails newsletter about his experience on a pilot CBT tour in the village of Pak Triam.

Jared Young, Spring 2006
Jared Young is a new type of tourist called the “voluntourist”—he came to the North Andaman area to help pilot NATR’s nascent community-based tourism (CBT) program. In this entertaining and educational account, he clearly differentiates cultural villages such as Tung Nang Dam from the likes of Patong Beach.

Building Ecotourism in Thailand After the Tsunami

Georgi Marshall, July, 2005
One of NATR’s most beloved volunteers, Georgi (GiGi), recounts a day in the village of Tung Nang Dam, where she visited some of the kids NATR is sponsoring with educational scholarships.

Bodhi Setchko, March 8, 2005
A a child therapy volunteer coordinator who worked with NATR reflects on his experience in Thailand upon returning home

Christopher John, Spring 2005
Chris happily skips out of the office for a day to set sail with the fishermen of Bak Jok to see firsthand the results of NATR’s squid trap replacement project. Along the way he learns a lot about their culture and lifestyle.

Lucy Dixon-Clarke, Spring 2005
Lucy was one of our first volunteers. She was enjoying a yoga retreat at Golden Buddha Beach on Koh Phratong in the weeks before the disaster. When she heard the plea for volunteers in the North Andaman area, she immediately returned to help. In this heartwarming account, she shares her memories of the chaos she discovered upon returning to the area, and of the birth of NATR.

The Old Man Who Survived

Wall Street Journal, December 29, 2004
A harrowing tale of a 72-year-old man who was washed out to sea by the tsunami and survived. He was vacationing at Golden Buddha Beach, an Eco-resort on Koh Phratong, one of the many areas NATR serves. 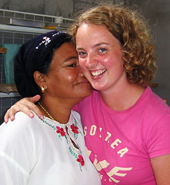